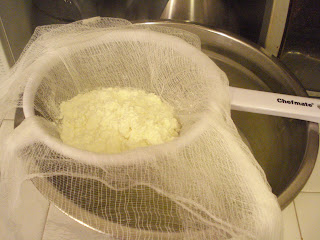 This has been one of the most amazing nights I've had in weeks. Possibly, months.

The most amazing thing is taking place in my kitchen.

It started a few months ago when the Other Adult in my family began pestering me to make Malai Kofta. I took a few quick looks at the recipes online and determined that Malai Kofta, done properly, is time consuming and requires some ingredients I don't normally keep around the kitchen. Words like, "raisins" and "heavy cream" popped out. And worse, "paneer". (actually, there were a lot of words in these recipes I had never heard of and was forced to ignore--one example: jeera. Jeera, in case you aren't aware, is (are?) cumin seeds. I'm going to have to use cumin as a substitute)

I needed paneer. I called around to a few Whole Foods grocery stores, where the clerks were puzzled and asked me what paneer was. I told the Other Adult that I couldn't find paneer and silently wished she would drop it.

She gave me the phone numbers for a few ethnic grocery stores in the area and asked me to call around. I put this off for three months until last night when bickering ensued and I decided I had waited long enough.

Today, I placed several annoying phone calls to ethnic grocery stores located around my office. The most degrading of these phone calls went something like this:

and so on. Could he could hear my midwestern ignorance over the telephone?

After hanging up, I googled paneer.

There's a wiki article about paneer. It's made by combining milk with lemon juice, separating the curds from the whey, and pressing the curds in a cheese cloth. I decided very suddenly to make the paneer myself.

The recipe I am following came from Manjula's Kitchen and is as follows:

Paneer
Ingredients
Combine lemon juice with 1/4 C water and heat. Meanwhile, bring milk to an almost boil--stir frequently (my milk burned to the bottom of the pan and I stirred quite a bit) Once the milk is almost boiling, gradually stir lemon juice mixture into milk. Remove from heat when curds separate from whey.

Just FYI, it's really impressive to watch curds separate from whey. I never thought to make cheese in my home. This is one of the huge thrills I get from cooking: making food I once thought could only be bought from stores. That could only be obtained wrapped in plastic, sold in boxes.

My current regret is that the Kid is grounded and in her room after a debacle at school today, and she missed the show. 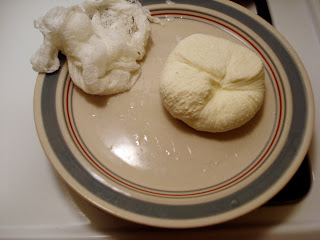