The Other Adult believes that Microwaves Are Bad. She believes that the radiation from microwaves probably causes cancer and at the very least microwaves heat unevenly and cause crunchy foods to go soft and mushy and in general microwaves make good foods taste bad.
We had a little microwave in college. It was just large enough to hold our 4 cup Pyrex measuring dish, and in college when we lived in a dorm room and had no kitchen, we used it to boil water so we could make box mac 'n cheese and cream of wheat and hot tea. We decorated the top of the microwave with shelf liner that was blue with a pattern of silver swirls.
We took the microwave with us after college, and it followed us to three different cities and two different coasts. The microwave had no digital face and no power settings to speak of, just a dial that worked like a timer, so that you could set the microwave to heat a food for a specific length of time. Our microwave was the perfect size for a counter top in a little apartment. After college, our need for the microwave decreased dramatically. In fact, I don't know if we needed it at all. We used it primarily for defrosting frozen peas.
Our house came with a microwave over the stove. The microwave, probably from the 80's or early 90's, looks out of place in our kitchen with knotty pine cabinets and a vintage 1940's/50's era oven. This microwave has a complicated digital interface, power settings and buttons for defrosting/cooking specific types of food. I have barely bothered to learn how to use it. The interior of the microwave is like four times the cubic volume of our previous microwave. We use it to defrost frozen peas.
We do not buy microwave popcorn. Nor do we have a popcorn maker. I make popcorn over the stove. Stove top popcorn takes only a minute or two longer than the time it takes to microwave popcorn.
Ingredients:
Directions:
Basically, put your pot over high heat. The pot must have a lid. I think the pot I use holds about 8 quarts. Add olive oil and popcorn kernels to the pot (I never measure the amount of popcorn I put in, but I think 1/2 cup is a good guess). I usually sprinkle the kernels and oil with salt.
This is going to work better on a gas stove, but I think you can do it on an electric. For a gas stove, start by putting the lid on the pot. Hold the pot up above the burner so that the flames lick the bottom, and swirl the pot around gently so you can hear the kernels sliding around in the bottom of the pot. The kernels will start to pop after a minute or more. If they don't start popping, you're holding the kernels too high. Once the first few kernels pop, they'll all start to pop at once, furiously. If the pops stay few and far between, the pot is too high above the flames. Keep swirling the pot. The popping will hit a climax then become less. Remove the pot from the flames before the popping has stopped entirely. This whole process probably takes about 4 minutes start to finish.
On an electric range, leave the pot on the burner and the lid off. Keep the lid nearby and within reach. I've never tried this on an electric range so you may need to adjust this process to what works for you. Stir the kernels in the pot with a wooden spoon until the first two or three kernels have popped. Put on the lid, turn down the heat to medium and swirl the pot around on the burner to keep the kernels moving.
Salt the top of the popped popcorn as desired.
Some tips:
1) The handles on your pot may get quite hot. I've found that the pot gets warmer when there's no liquid inside to absorb the heat. Wear oven mitts the first few times you do this--especially if your pot is the type that has two short handles on the side instead of one long handle.
2) Although I specified half a cup of kernels in the recipe above, I don't actually measure the quantity I put in the pot, I just eyeball it. I do know that a small portion of kernels will yield a surprisingly large batch of popcorn so go easy on the kernels the first few times you try this. 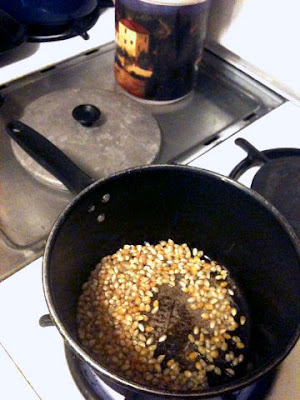 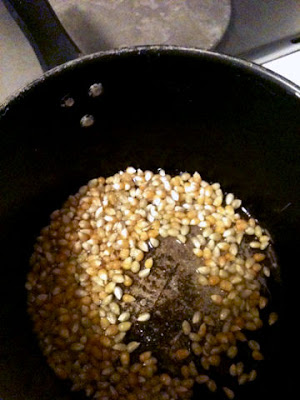 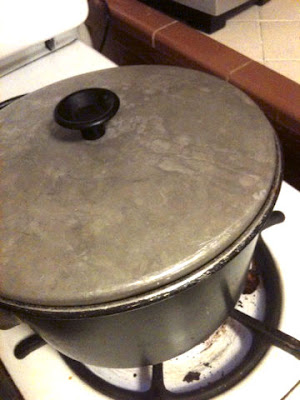 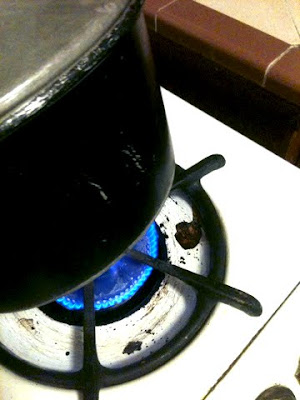 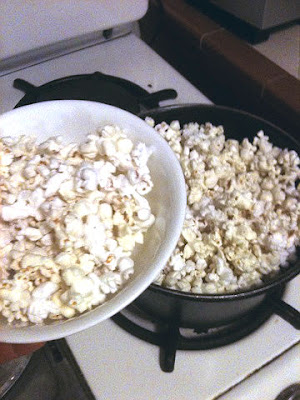