My family calls it Pine Nut Pasta. It used to be that we couldn't get enough of this stuff, but I think the Other Adult got burned out on this because I was always suggesting it, or maybe the Kid was always asking for it, whatever. So now we rarely have it, but we had it again last night, for the first time in ages. It's delicious. And I remembered all over again why we used to eat it all the time...cause it's fast and delicious and healthy.

The original recipe comes from What's Cooking Vegetarian, by Jenny Stacey--a favored family cook book so used and worn that looks like we left it on a battlefield. We have adapted the recipe to suit our needs, though some of the changes I'm not sure why we made.

I've decided to start giving the prep time for these recipes because prep time is so crucial to people like me who run in the door at 5:00 at night...not sure how I didn't think to do this before.

The original recipe calls for 6T white wine over the pine nut mixture, added around midway through the saute. When we were first developing this recipe, we were broke and probably never had white wine on hand, which may be why we eliminated that from the recipe. Also, the original recipe calls for mushrooms. We never put them in but as far as I can tell, there isn't a good reason for that. hmmm... 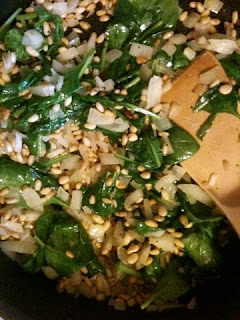 Email ThisBlogThis!Share to TwitterShare to FacebookShare to Pinterest
Labels: pasta