Well after two weeks of waiting and looking at the carboy and obsessing and having excited fantasies about sitting down on the couch with a cold home brewed beer and watching a full 1 hour television show, I bottled my beer.

This was a long process. Start to finish it took about 4 hours, partially because my sanitizer is the type that needs to be rinsed, a situation I will be remedying before my next batch.

I had to wash and sanitize about 60 bottles, which turned out to be more than I needed. Washing and sanitizing the bottles took about 2 hours. First I washed each bottle with a bottle brush and soapy water. I've been collecting these bottles for about a year, so as I cleaned the bottles, I spent my time reflecting on our old apartment, and the move over the summer, and the ways that my life has completely turned on its head since last February. One of the things I love about beer is the way that drinking different kinds of beers reminds me of the various times in my past when I have had said beers. Guinness, for example, is the first beer that I ever liked. When I drink Guinness, I remember the first Guinness I ever had. I remember the excited wow that popped into my head when I had that first sip.
Now these beer bottles remind me of the not-so-distant past, of our old kitchen, of our old loft where I stored the bottles. Sundays spent doing laundry and cooking. Carpeting and cathedral ceilings.
After washing and sanitizing all my bottles, I sanitized my fermenting bucket, siphon, hydrometer and bottle caps. I also sanitized a couple dishes where I could place tools and bottle caps that weren't being used. Then I used the racking cane to transfer the beer from the carboy into the fermenting bucket. I could have left the brew in the carboy but I thought the fermenting bucket would be easier to bottle from.
After I filled the fermenting bucket, I diverted a little of the brew into the plastic hydrometer tube. I don't have a wine thief (think of it as a turkey baster for brewers), which would have helped here, so I filled the hydrometer tube from the spigot in the bottom of the fermenting bucket. The hydrometer measures the density, or the gravity, of the brew. It's a buoyed glass tube with numbers up the side, and looks a bit like a thermometer.
Bearing in mind that I'm still a little fuzzy on details of brewing, I believe that the reason you must check the gravity of the brew is because you need to measure the sugars remaining in the mixture. As the yeasts eat up the sugars, the liquid becomes less dense. Once all the sugars are gone, this is called Final Gravity. When the brew reaches final gravity and the density stops dropping, that's when you're ready to bottle.
The wise people at the Beer Wine and Cheese store told me that I should hit final gravity after 7-10 days of the second stage of fermentation. I waited 14 days because I brew on the weekends, and I wanted to be sure I had given the brew enough time to reach final gravity. I asked the clerk at the store if there were negative consequences to going over the prescribed 7 to 10 days and he said no, within reason. He said not to wait 2 months after final gravity:)
I measured the gravity. Because this was a recipe that I obtained at the Beer Wine and Cheese shop, I knew beforehand that the final gravity was supposed to be 1.01 or 1.02. Had I been making up my own recipe, I would have needed to determine final gravity for myself.
The gravity was about 1.01. What are the consequences of bottling before reaching final gravity? Not sure.
So then, onto bottling. My priming sugars were powdered, so I boiled a cup of water and dissolved the sugars into the water, per the instructions from the guy at the Beer Wine and Cheese store. I poured the sugars into the brew and stirred them carefully with my racking cane.
I attached the plastic hose to the spigot on my fermenting bucket, then put the bottling attachment at the other end of the hose. The bottling attachment has a pressure sensitive tip that, when depressed into the bottom of the bottle, lets the beer through. I turned on the spigot and depressed the tip of the bottling attachment, and filled my bottles. In between bottles, I allowed the bottling attachment to rest in the top of the carboy.
The fuzzy picture below shows a bottle, the bottling attachment in the carboy, and the bottle capper. The bottle capper has a magnetic piece that holds onto the bottle cap. You tip the bottle capper over the top of the bottle, depress the handles all the way down, and then lift the handles back up. In most cases, when you pull the bottle capper off the bottle, the cap is solidly on the bottle. Probably 1 time in 6, the bottle cap goes on sideways or just doesn't go on at all. I wasted about 15 bottle caps in this process. 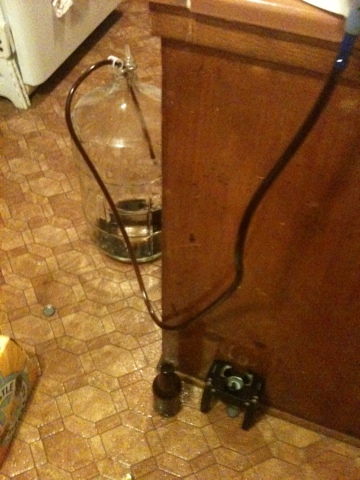 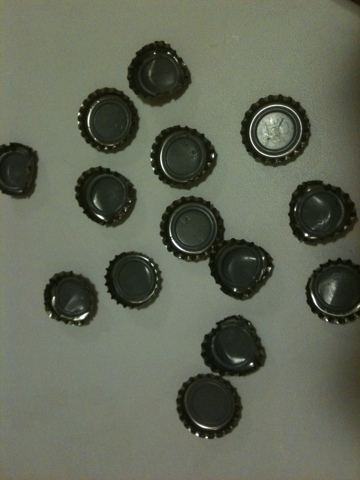 A better shot of the bottle and bottle capper: 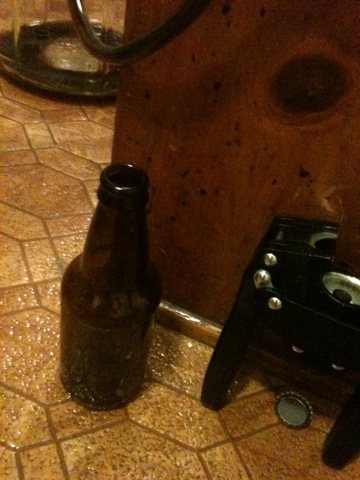 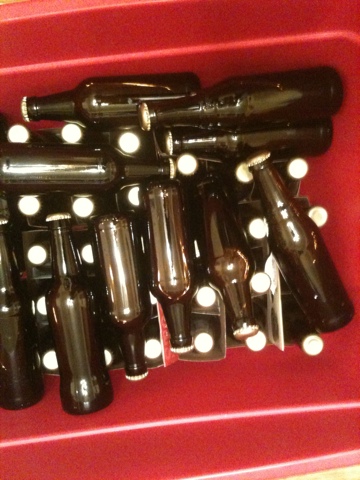 This yielded about 45ish bottles of beer. For the time being I stored them in a big plastic tub in the office. At the end of two weeks, when I can drink them, I'll move them into the garage.
I'm planning to start my second brew in March, when I get paid and can buy some more ingredients and Star San sanitizer.
Some things I have learned and wish to remember for the future:
1) Next time I do a boil, I can start boiling the water while I'm sanitizing the rest of my equipment. This will save a lot of time because boiling like 3 gallons of water took basically forever.
2) Need to put water in my airlock. Duh. This is very likely why I thought my yeast was dead--the airlock was being improperly used. Craig put a lengthy talk about airlocks online:
3) According to the guy at the Beer Wine and Cheese shop, putting double yeast into the fermenting bucket probably didn't hurt anything. It may even have helped.
4) while inefficient, transferring the brew from the carboy back into the fermenting bucket seems to have helped me ditch some of the sediment in the bottom of the brew after 2nd stage fermentation.
Posted by Leslie at 9:11 PM