beer brewing, first try: the mysterious failure of the yeast

As mentioned in a previous post, on Saturday night I gave my first shot at beer brewing. I chose a dry irish stout from a kit assembled at the Beer Wine and Cheese making store not far from my house. In the future I have plans to brew beer not from kits, but from my own assembled ingredients. But this was my first try.
Beer making is complex and it happens in different stages. First you boil the wort, then you let it ferment, then you bottle it. There are long stretches of time in between steps. I will probably post more on the specifics of beer making later, but what happened that night, in a nut shell:
1) I cleaned and sanitized the equipment
2) let the grains steep in a big pot on the stove for 45 minutes
3) strained out the grains and poured the liquid into a 5 gallon pot
4) poured more water over the grains to fill the 5 gallon pot about 3/4 of the way full
5) boiled the liquid in a 5 gallon pot for 1 hour, adding hops at the appropriate intervals
6) cooled the liquid (called wort) very quickly in an ice bath
7) dumped yeast into the wort
8) poured the cooled wort into the fermenting bucket
I'm a little fuzzy on the specific chemistry of beer making. This is something I'm still learning. What was supposed to happen next--my understanding of it anyway--is that the yeast was supposed to grow and do its thing in the bucket. Yeast releases all these gases; I know this from making sourdough. My sourdough starter, when healthy, will literally blow the lid off the tupperware container I keep it in after it's been fed. In the case of beer, the fermenting bucket has an airlock on the lid. The purpose of the airlock is to release the gas in the bucket but prevent air from coming in. This means you should see bubbles escaping from the airlock, but this is the problem: on Monday after 48 hours there were no bubbles coming out of my bucket.
There were two possible problems I could think of:
1) the yeast was dead. I killed it, or it was dead to begin with.
2) the lid wasn't tight on the fermenting bucket. I didn't think this was the case, but I supposed it could be possible that there was air escaping from the sides of the lid where I had to cut it. See, the lid was too tight before I started the boil, so I couldn't even get it to seal on the bucket. The bucket came with instructions that if this was the case, I needed to cut the side of the lid to make the fit less tight. All the same, if the yeast was healthy I still think I would see some activity. Even if gas was escaping from the tiny cracks in the sides, the fact remains that the airlock is a much better escape route and I should see most of the gas escaping that way.
Yesterday I ran back to the wine cheese and beer making store, and I picked up some new liquid yeast. The packet of yeast was kind of a double-layer thing, with a packet on the outside and a packet on the inside. The instructions said that 3 hours before pitching the yeast, I needed to blow open the interior packet by popping it with a good, swift smack. Then for 3 hours, the yeast gases expanded in the packet and the packet got big and hard. After 3 hours, I cracked open the bucket one more time and dumped the yeast in. The wort inside was bubbly and frothy, which indicates to me that the original yeast had been active, or at least some of it had. Then I was faced with the choice to put the new yeast in, given that there had been some previous yeast activity. I went ahead and dumped in the yeast, and the interior yeast packet fell into the wort. I'm posting a picture: 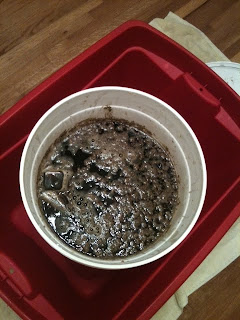 The thing that looks like an ice cube on the left hand side is the yeast packet that fell in. I had to fish it out with hastily sanitized tongs, and I don't think I sanitized the tongs well enough because I kind of panicked. 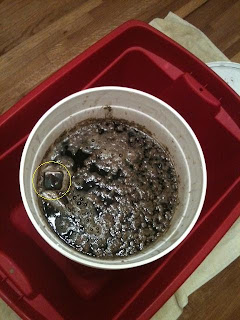 The guy at the store said the "odds are in my favor" for saving the batch, but we'll see. He said that before I dumped the yeast packet in the brew. See, keeping the wort sanitized during the fermenting process is like one of the most important things you can do. There should not be bacteria in the wort or the brew will be bad.
The biggest problem I face at this point is that if the brew fails, I won't have the slightest idea what caused the problem--there are so many potential causes. Bacterial contamination? If so, from where--the yeast packet? The hastily sanitized tongs? Cracking the lid on the fermenting bucket like 3 times? My sanitizing process before the boil? The cheap sanitizer I used?
And it seems pretty likely at this point that this brew is going to fail:) I just won't know why.
It took me a year to get the sourdough right, and sourdough is actually much less complicated than beer. The guy at the store just said it was important to enjoy myself. I realized, I am enjoying myself. It's ok if the beer is dead. I'll be disappointed, but I've been dropping in on my fermenting bucket every 2 hours. It's the first thing, literally, the first thing I think of when I wake up in the morning.
Posted by Leslie at 1:15 PM