The first holiday we ever spent with the Kid was Easter. This was after she started visitations at our apartment, before the adoption. She was then like 6, and she had some concerns that the Easter bunny wouldn't know where she was or how to find her. So I said, well, we'll do the Easter Bunny dance and of course he'll find us. Not to worry.
So that night I made up the first Easter Bunny dance. She had to do it with me, so I'd do a step and then she had to repeat what I did. More rain dance than two step, it involved some clapping and hopping and chanting things like "Easter!".
By Christmas time the Kid was confident that her change of address had gone through, and there never was a Santa dance or anything like that. I forgot about it until the following Easter, when she just expected we would do it again. It turns out that my kid now thinks this is just a normal part of Easter. The Easter dance. I have no idea if she thinks other families also do this, or why we did it that first time. This year, she asked me how I know it--the dance. but I make it up on the fly, and it's different every time.
I wanted to make a traditional Easter dish this year, but as you probably know, vegetarians don't eat ham. I settled on hot cross buns, a traditional food on Good Friday. Then the weekend came and I was just too lazy to make hot cross buns because the recipe was going to take like three hours. The Kid requested pancakes, and I settled on a plan to make pancakes in the shape of bunny heads.
It turns out that this is actually much harder than you might think. Pancake batter just doesn't want to form any shape other than a circle. The final product was globular and asymmetrical. I meant to add chocolate chip eyes and a nose, but I had no chocolate chips in the cupboard, so what I fed to the kid was this weird misshapen pancake that bore no resemblance to a rabbit whatsoever. 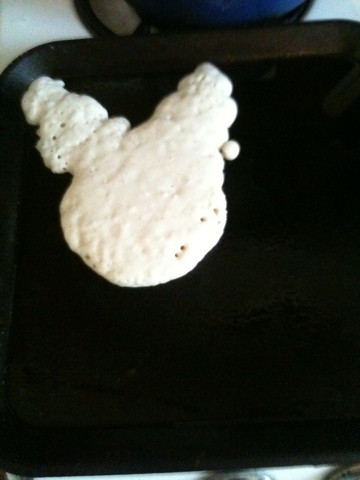 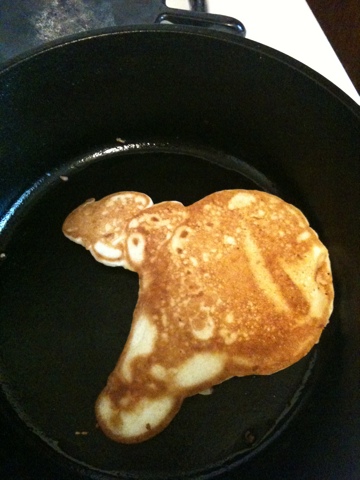