the bread crazy and a walnut bread recipe

I mentioned in the last post that breadies measure ingredients in grams, ounces and percentages. Reading a breadie recipe is hard for someone who doesn't speak breadie. These recipes use words like "hydration" and "autolyse".
Here's a great example of a breadie recipe that sounds like half gibberish to me. It looks like a very beautiful bread and I would love to be able to make it for myself, but I have no idea what 69% hydration means, or how you tell if gluten is moderately well developed, or how to 'fold' during the bulking period (although I have some guesses about that one).
As far as bread baking is concerned, I've been doing kiddie stuff. Wearing training wheels. I still talk like a regular person--and I measure flour in cups and I never use the word autolyse.
Enter this recipe for walnut bread. It looks like the most beautiful bread I've ever seen. When I saw it I knew I just had to try it, but if you clicked on the link you'll notice that all the measurements are in grams and ounces.
The Other Adult did a nice thing for me this weekend and bought me a scale.

It looks like that. As far as scales go, it's not exactly sophisticated. Or sensitive. But it's cute and doesn't take up much room in the kitchen and it will at least allow me to make some of the big girl recipes, like the walnut recipe.
Dan Lepard's Walnut Bread, preparation time around 4 hours
Ingredients

a pinch of fine sea salt

1 1/4 tsp fresh yeast, crumbled (I used bread machine yeast because it's all I had)

Blend together the paste ingredients in a food processor, coffee grinder or blender.

Mix the flours and salt, then add the remaining combined ingredients, including the paste. Combine as evenly as possible with your fingers. Cover and leave 10 minutes.

Knead for 10 seconds. Leave for another 10 minutes. Knead once more and leave for an hour in a warm place.

Line two 1.5 litre bowls with flour-dusted tea towels. Divide dough, shape into balls and leave in the bowls seam-side up, covered with the edges of the towels, 2-2 1/2 hours or almost doubled.

Preheat oven 410F. Turn dough out onto floured baking sheet (I used cornmeal.) Slash in a criss-cross pattern. Bake in center of hot oven 50-60 minutes til a good rich brown. Cool on rack. 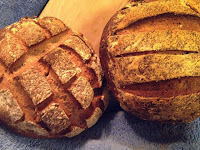 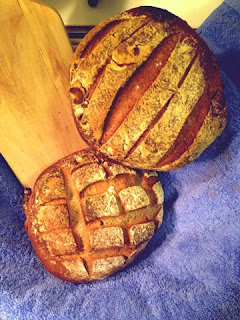 I also steamed the oven for the crust on this bread. I have a problem with breads developing weird, pale crusts because of the dry environment in the oven. This is a common problem and steam is the solution, so a lot of bread people find weird ways to make their oven into a moist environment for the first 15 or 20 minutes of the bake. The Jim Lahey bread doesn't have this problem because it's baked in a ceramic pot with a lid that holds in the steam and the crusts turn out just fine, but on other breads the crust tends to be pale and hard.
I don't know if steaming the oven was necessary in this recipe, but I did it anyway. I put a cast iron skillet in the bottom rack of the oven when I preheated. When I put the bread in the oven, I put 1/3 cup of water on the cast iron skillet, creating a steamy environment in the oven. After 15 minutes, I opened the oven and let out the steam for a few seconds, then I closed it and proceeded with baking as normal.
This is eventually going to ruin my cast iron, so I need to get a cast iron I don't care about that I can dedicate to this purpose.
Posted by Leslie at 7:57 AM

Email ThisBlogThis!Share to TwitterShare to FacebookShare to Pinterest
Labels: bread